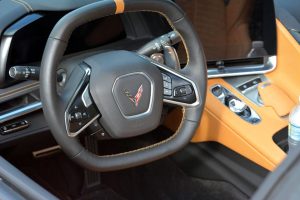 If you want to purchase a new Chevrolet Corvette Sting Ray be prepared to wait.  Dan, a local auto enthusiast, having not seen the much-anticipated 2020 sports car, put down a deposit on the car sight unseen. That was four months before the official reveal of the newest version of an American icon supercar.  He then waited for delivery.  And wait he did.

First, there was a strike by union workers, followed by COVID-19, and finally in late October 2020, 20 months later, his red convertible arrived.

After Dan introduced me to his super sleek mid-engined stallion, the two of us agreed it was worth the wait.

The new 2020 Chevrolet represents a first-ever for the Corvette.  Mid-engined layouts are a race-derived solution to improve weight distribution and handling. Keeping the center of gravity as close to the middle of a car as possible helps to neutralize oversteer and understeer.

Putting the engine behind the driver and passenger places the heaviest single part of the car much further to the rear and closer to the driver’s seat, making the car feel as if it’s centered around the driver. Also, the occupants sit further forward in the car, closer to the front wheels.

Once the Formula race series moved over to producing mid-engine race cars, the road car manufacturers followed suit. There are downsides as the cars are more expensive to build and more difficult to maintain, making mid-engined designs only really suitable for sports cars.

What makes this vehicle even more special is how it is outfitted. The base version of the 2020 Corvette Stingray has a 495-horsepower 6.2-liter V8 engine with 470 lb-ft of available torque. Assisting the driver to manage all that power is an eight-speed automatic transmission with a dual-clutch and responsive paddle shifters. No manual transmission is available, which may disappoint some but the last time a manual shifted car won a Formula One race was over 25 years ago and it is not missed.

The ride is, as expected, very fast.   And what makes it special is the faster you go the better it feels. It sounds like it feels, throaty and balanced or NASCAR loud, giving you the option of toning down the rumble so you don’t scare the neighbors.

This is also an automobile that requires seat time.  It is a beast and in South Florida there are not many, if any, street locations where the Sting Ray can be put through its paces.  It yearns for some track time and a driver with the ability to master its muscle.

The interior is awesome as it literally wraps the driver and the passenger in sport safety luxury.  Its gage cluster is a computer display that allows the driver to display the information which relates to the performance profile selected.  Drivers may not initially approve of the rectangular steering wheel, but with the paddle shifters, I believe they will adjust to the feel. The waterfall bar that separates the driver and passenger is comforting.  The bar contains the controls for the air conditioning and seems unusual at first, but keeps things in reach.  The display for music, navigation, and other comfort apps is well-positioned and angled for the driver’s review.

Like a Porsche Boxster, the Sting Ray has two trunks or boots, as the Brits say. And in this case, it has room for golf clubs.

In this Corvette, Chevrolet has built a supercar for the masses, an American Ferrari, or simply a better Corvette. The base C8 goes for just $59,995, hundreds of thousands less than the McLarens, Ferraris, and Lamborghinis it resembles.

Just be prepared for the worth-while wait.